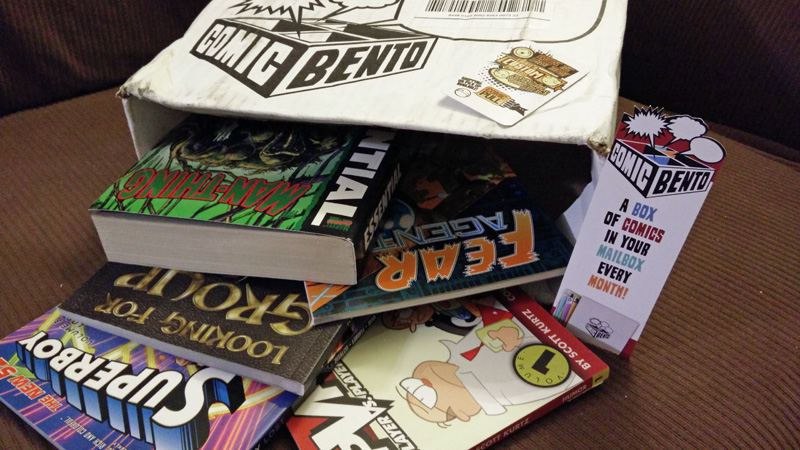 A few days ago, my husband Seanie and I received our first Comic Bento, a new graphic novel subscription box curated by the folks at Blind Ferret. Each month, Comic Bento promises to deliver a box of comic books with a minimum value of $50. Since the subscription itself costs $20.00 a month (plus shipping), it's an incredible deal.

Although later boxes will be curated around a theme and will share content, the inaugural box was a grab bag of comic books. (Comic Bento Project Manager Costello describes it as a “sampler”.) Each box is different, but here's what we found in ours:

Superboy Vol. 3: Lost (DC Comics): “Deep inside a lab run by an organization known as N.O.W.H.E.R.E., a living weapon was being developed from the DNA of the Kryptonian visitor Superman.  Spliced with human DNA, this clone of Superman seemed to be a failed experiment, until it escaped and became known as Superboy.” $16.99.

Essential Man-Thing Vol. 1 (Marvel Comics): “Whoever knows fear will see just how much there is to know in this compilation of staggering swamp sagas! Explore the heights of the cosmos and the depths of the soul with the mindless Man-Thing! Guest-starring the Fantastic Four! Ka-Zar! Daredevil! Korrek the Peanut Butter Barbarian! And featuring the first web-footed steps into adventure of Howard the Duck! $16.99.

Fear Agent Vol. 3: The Last Goodbye (Dark Horse Comics): “The origin of the last Fear Agent revealed! Fanfavorite creators Rick Remender and Tony Moore reunite to tell the most pulsepounding yarn yet. Tired and broken down, trucker Heath Huston returns home after months on the road to find his troubles have only just begun as Earth is attacked by the three feuding alien races. Within hours nearly every living creature on Earth is obliterated, leaving Heath and his wife Charlotte trapped in the middle of a nightmare with no way out.” $13.95.

PVP at Large Vol. 1 (Image Comics): “Office hijinks, role-playing games, teenage geeks in love, old high-school rivals, and a Troll who's run away from home: It's just another average day at PvP Magazine.” $11.99.

Looking for Group Vol. 1 (Blind Ferret Entertainment): “There is a place, set in a reality and time unlike our own, where the eating of small children is not necessarily frowned upon; where beings of extraordinary power can destroy entire villages with only "because I could" as an excuse; where families are comically torn apart and sold into slavery in exchange for powerful weapons or a really nice hat; where prophecy, magic, and adventure is as common place as setting fire to and then re-animating a chipmunk into a skeletal minion (it happens more than you'd think); and where an epic journey can begin by an accident of fate. This is the world of Looking For Group.” $14.95.

The cover price for all these comics is just a few cents shy of $75.00, making the box a truly incredible deal. Most of the comics are fairly recent releases; PVP and the Essential Man-Thing are the oldest, published in 2006, while the Superboy comic just came out in January of this year.

My husband and I had very different reactions to the box, revealing very different motivations for why we like subscription boxes. Seanie was thrilled with the random selection, because he likes the surprise factor and the bargain-basement deals found in a good subscription box. Every month, he wants new comics to read, and Comic Bento's box is a busy man's way to discover

something new without being forced to wade through the endless stacks of new titles at the comic book shop. If you're a comic book reader, this is an incredible deal.  He was a little disappointed when he read that future boxes will not be randomized, because he likes the idea of a unique box each month.

I'm a little different. I like subscription boxes because of the curation. I am content with a lower value return if I think that the items in the box were selected for quality, and I am a sucker for a good story. (See my last Book Riot review - I'm willing to try a book or two outside my usual genre if the subscription box's curator tells me it'll be worth my time.) When I opened this box, I was disappointed because to me it looked like a comic book shop's half-hearted attempt to unload excess inventory in bulk. Two of the books, Superboy and Fear Agent, start mid-series and I'll feel obliged to track down earlier volumes before reading them, which my husband insists isn't necessary for superhero stories but I just hate reading series out of order. 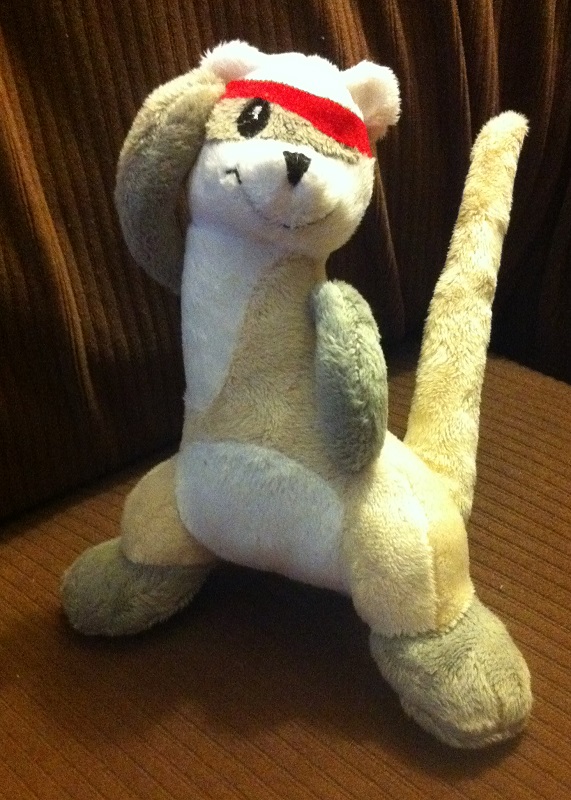 But that's not to say I'm unsatisfied with the box. I'm actually really excited about Man-Thing, because it's one of those Marvel titles I've always wondered about but never actually felt the need to purchase. I'm also really happy that there's such a variety of publishers in the box – I was worried that it would be dominated by Marvel or DC. I look forward to future boxes and seeing what kinds of themes Comic Bento has planned for its subscribers.

Oh! I almost forgot! In addition to the five graphic novels, Comic Bento threw one more thing into each box: a Blind Ferret, their plush mascot. Cute, no?


If you're interested in learning more about Comic Bento, visit their website. Boxes ship monthly, and subscriptions start at $20 per month, with discounts should you buy a three- or six-month subscription.

Peeking into the archives...today in:
2013: A New Adventure: Moving to Utah
2012: The Seventy Great Mysteries of the Ancient World edited by Brian Fagan
2011: Tail of the Moon Vol. 1 by Rinko Ueda
2010: Off to Ashland for the Oregon Shakespeare Festival!
2009: Giveaway #9: Three Chinese Stories
2008: Discussion Question: Favorite Classics Publisher?
Collapse