Since 2008, Powell's Books of Portland, OR has run a book club/subscription service that sends a new hardcover book, in a custom slipcase, and a couple of bookish surprises every six weeks to its subscribers. Sound cool? It gets better. Each book also comes with a booklet containing an interview with the author about the book - not just a couple of quick questions about their favorite book or personal biography, but questions that dig deeply into the novel and provide real insight into the book's creation. Following a terrible fight with her mother over her boyfriend, fifteen-year-old Holly Sykes slams the door on her family and her old life. But Holly is no typical teenage runaway: A sensitive child once contacted by voices she knew only as “the radio people,” Holly is a lightning rod for psychic phenomena. Now, as she wanders deeper into the English countryside, visions and coincidences reorder her reality until they assume the aura of a nightmare brought to life.
For Holly has caught the attention of a cabal of dangerous mystics—and their enemies. But her lost weekend is merely the prelude to a shocking disappearance that leaves her family irrevocably scarred. This unsolved mystery will echo through every decade of Holly’s life, affecting all the people Holly loves—even the ones who are not yet born.
A Cambridge scholarship boy grooming himself for wealth and influence, a conflicted father who feels alive only while reporting on the war in Iraq, a middle-aged writer mourning his exile from the bestseller list—all have a part to play in this surreal, invisible war on the margins of our world. From the medieval Swiss Alps to the nineteenth-century Australian bush, from a hotel in Shanghai to a Manhattan townhouse in the near future, their stories come together in moments of everyday grace and extraordinary wonder. 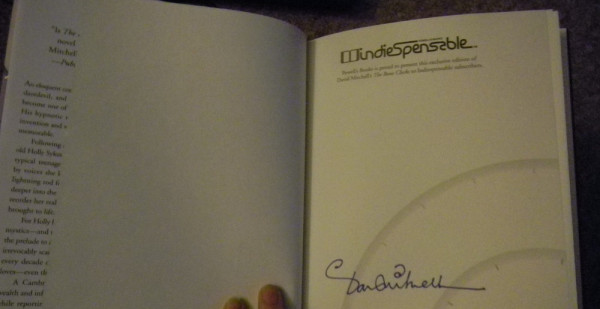 Each copy of The Bone Clocks is signed by David Mitchell on a special Indiespensable page and placed in a custom slipcover only available through the subscription service. 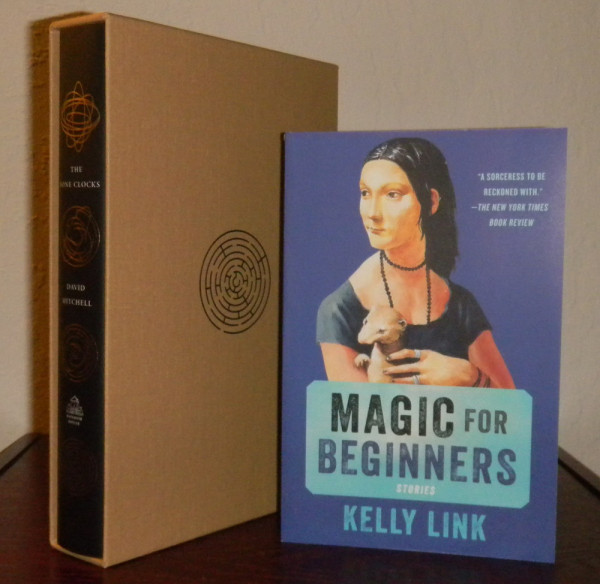 A second book was included in this month's mailing, a paperback reissue of a collection of Kelly Link's short stories.

Magic for Beginners by Kelly Link
Perfect for readers of George Saunders, Karen Russell, Neil Gaiman, and Aimee Bender, Magic for Beginners is an exquisite, dreamlike dispatch from a virtuoso storyteller who can do seemingly anything. Kelly Link reconstructs modern life through an intoxicating prism, conjuring up unforgettable worlds with humor and humanity. These stories are at once ingenious and deeply moving. They leave the reader astonished and exhilarated.

Neil Gaiman describes Kelly Link as "unique and should be declared a national treasure."  That's a pretty good endorsement if you ask me!  I look forward to reading this one, too.