Colorless Tsukuru Tazaki and His Years of Pilgrimage
by Haruki Murakami 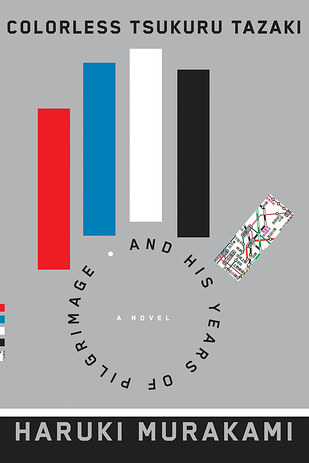 When he was in high school, Tsukuru Tazaki was part of a close-knit group of friends. In the years before and after, he never experienced such a strong to connection to other people. But during his sophomore year of college, his friends cut him off completely, abruptly and without explanation. Years later, a new girlfriend tells Tsukuru that he is still haunted by the loss of his friends, and unless he understands why he was expelled from the group she will not be able to share a deep relationship with him. Thus encouraged, Tsukuru reaches out to his former friends to solve the mystery of why he was cast out of their perfect community.

If you’ve read other Murakami books, Colorless Tsukuru will have a very familiar flavor. Dreams, as always, are close to the surface, separated from reality by only the blurriest of lines. There are strange little side stories that don’t impact the main narrative at all, and in the end many plot threads are left dangling. The main character, Tsukuru, is a sort of vague Everyman with no strong, defining characteristics. If you haven’t read Murakami before, stop and consider if these are the sorts of things that bother you, because these elements appear in nearly all his novels.

Tsukuru is a self-described “empty vessel” that needs to be filled. He considers himself as bland and lacking, and it’s hard to see him in any other light. He doesn’t seem to do much on his own; it is only after the prodding of his new lover that he recognizes his need to understand the traumatic separation in his youth. Tsukuru decides the best thing to do is surprise his friends by showing up unannounced at their offices or their home. That gives his actions a strong “creeper” factor! At one point, he decides to visit one of his childhood friends in Finland, so he gets her address from the Internet and enlists the help of one of his girlfriend’s coworkers to help him sneak up to the old friend’s summer vacation spot and show up on her doorstep. Remember, this is after sixteen years with not a word exchanged between them! Am I the only person who would be extremely uncomfortable – nay, extremely freaked out - in such a situation? But everyone smiles and nods like this is totally normal and acceptable.

Still, the novel’s straightforward plot moves briskly, and Tsukuru’s pilgrimage progresses pleasantly along. It is occasionally slowed by flashbacks to the past that have little relevance to the story’s present. For example, Tsukuru reminisces about his friendship with Haida, a college friend who was the only prominent relationship in the years after his high school friends cut him off. One night, Haida tells Tsukuru a ghost story about a piano player his father encountered while working at a hot springs inn. It’s a nice little tale, but it has no bearing whatsoever on the rest of the book. But for the most part, I found the story much tighter and enjoyable than Murakami’s previous novel, the behemoth 1Q84.


To read more about Colorless Tsukuru Tazaki and His Years of Pilgrimage, buy it or add it to your wishlist click here.

Peeking into the archives...today in:
2013: 100 Ghosts by Doogie Horner
2012: Codename Sailor V, Vol. 1 by Naoko Takeuchi
2011: Mary Boleyn: The Mistress of Kings by Alison Weir
2010: Children of the Lamp: The Akhenaten Adventures by P. B. Kerr
2009: A Prisoner of Versailles by Golden Parsons
2008: The Hunt for the Seventhby Christine Morton-Shaw
Collapse