Author Event: Rick Riordan and The Blood of Olympus
at the Fox Theatre in Redwood City, CA 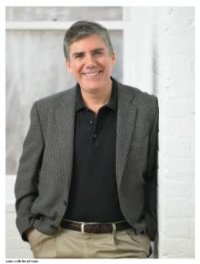 Last night Rick Riordan had an author event to celebrate the release of The Blood of Olympus, the final book in his The Heroes of Olympus pentalogy. It sold out very soon after Kepler’s announced it, but I was lucky enough to get a ticket thanks to the vigilance of my friend Jeans.

As we entered the theatre, Jeans quietly observed that we were probably the only adults present without children. Kids were everywhere. Although I don’t much care for kids, especially in large quantities, it was a little heartwarming to see so many children getting excited over books. Hundreds of eager little readers were happily clinging to their autographed copies of The Blood of Olympus, some chattering excitedly to friends while others already had the book open with their nose pressed to the page.

When “Uncle Rick” hit the stage, the kids started screaming with delight, but as soon as he started talking they fell silent. Talk about crowd control! He had them mesmerized. He began by talking not about the book, but about his childhood and the difficulties he encountered in school. Turns out Uncle Rick didn’t like reading because he was easily bored. As he spoke, a Powerpoint presentation on the screen behind him flashed pictures of baby Rick, child Rick, awkward teenager Rick…the kids loved it.

Riordan was a teacher for many years, so he shared many photos from his years in the classroom. Apparently he was one of those awesome teachers that loved to dress up in togas, Elizabethan garb, and anything else that would keep his students’ attention. Remembering how boring school was during his own youth, he tried really hard to keep the material engaging. Eventually he started writing adult detective novels, but as much as he enjoyed writing the books weren’t quite his voice.

It was when he started telling his older son Greek mythology stories at bedtime that he finally found his voice. Having run out of “proper” Greek myths, he started making up his own, setting them in modern times. From this Percy Jackson was born, and after setting these stories to paper and getting them published this character became a runaway hit.

Riordan took a break from reminiscing to show the audience some of the book covers from other countries, including the good (some of the new English covers are really nice) to the atrocious (a German edition that features a minotaur wearing a diaper). After working through the cover gallery, he talked about the new book briefly and answered some questions that had been submitted earlier via Twitter.

When his presentation was done, an announcement was made: there would be free t-shirts at the entrance for Camp Half-Blood and Camp Jupiter, the two headquarters of the demigods. It was chaos at the exit of the theatre as 1200 people fought to get their free shirt.

Jeans and I had been sitting high in the balcony, but even though we were at the ends of the line we each managed to get the shirt we wanted in our size. So now next time we decide to dork out and get dressed up, we can add “demigods” to our costume canon. 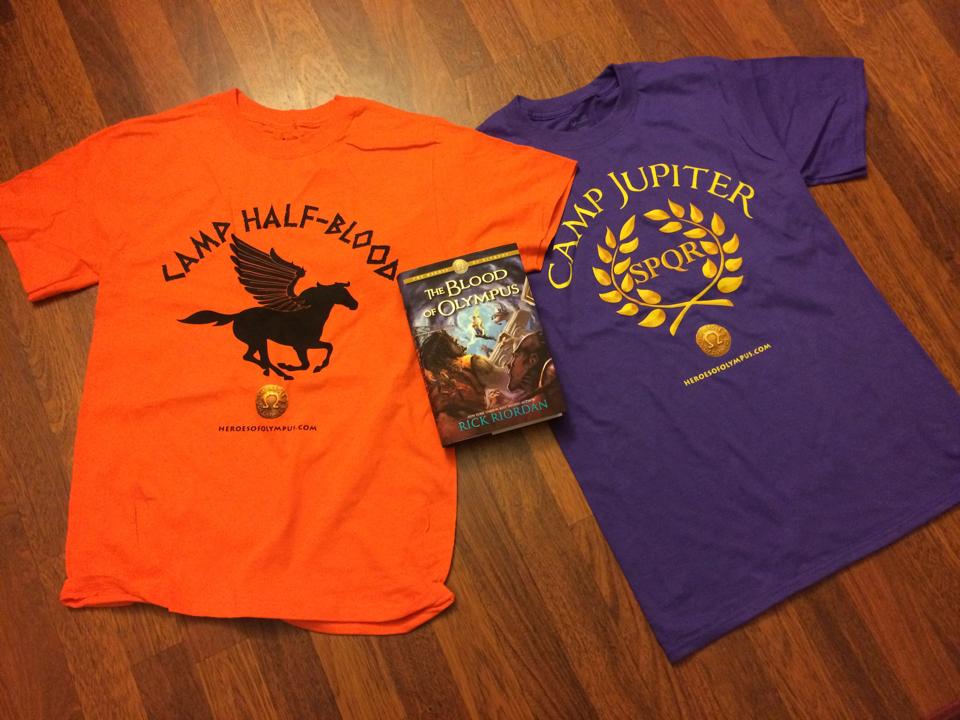 To read more about The Blood of Olympus, buy it or add it to your wishlist click here.

Peeking into the archives...today in:
2013: Utah Shakespeare Festival: Richard II
2012: Avatar: The Last Airbender – The Promise, Part One
2011: Taking a break- thank my teachers for it!
2010: The Countess by Rebecca Johns
2009: Powell’s Books is celebrating 15 years on the web with a massive giveaway!
2008: Discussion Question: What’s new with school?
Collapse