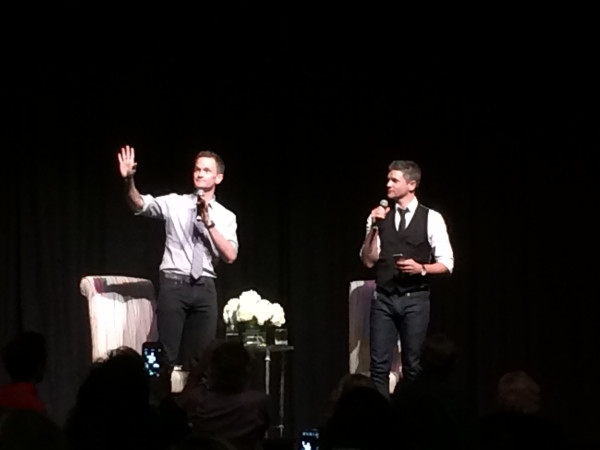 How do you get a big-name celebrity like Neil Patrick Harris to do a signing at your bookstore? According to the owner of Bookshop Santa Cruz, post a Youtube video in the style of Harris’ Tony Awards presentation and sing your way into a spot on his national tour. (I have not yet located the video, but when I do I’ll be sure to add the link here.)

Originally advertised as a book signing, the event was modified several times after the day I purchased my ticket. First, it was announced that NPH would be pre-signing the books and there would be no chance for personalization. Then, as if to make up for any disappointment, Bookshop Santa Cruz sent out an email to let attendees know that the moderator for NPH’s appearance would be none other than his delightful husband, David Burtka. It was also announced that David and NPH would stand in a receiving line to greet ticketholders after the talk.

When I got to the theater about ten minutes before the event was scheduled to start, I immediately got into a long line. This was just to get inside. Then it was on to a second line to pick up my pre-signed book. As I stood in this second line, I kept thinking, “Man, am I going to miss the beginning of NPH’s talk?” I needn’t have worried. As I stood there fretting, NPH and David were trapped somewhere on Highway 17, stuck in traffic. They didn’t make it to the venue until about half hour after the scheduled start time.

When they finally arrived and stepped onto the stage, the crowd erupted into applause. This enthusiasm never really went away – every time NPH or David mentioned one of NPH’s film projects or his role as a spokesperson for the gay community - the audience would scream with delight.

Naturally, he talk often turned bookish. According to NPH, one of his first jobs was working at a bookstore, and as he was growing up he loved books and reading. When someone suggested he write an autobiography, he loved the idea, but felt the normal straightforward approach wasn’t quite right. So instead, his book takes the form of a Choose Your Own Adventure story, with each section ending with two choices for the reader. Will they follow NPH down the path to fame, fortune and a life with David, or will they lead his life down a fictional path instead? (For readers who just want to read the book cover to cover, there are secret pages that aren’t linked from the choose-your-own-adventure pages.) It’s a very interesting way to tell a life story, because readers can confront some of the decisions NPH has faced in his life and perhaps get a glimpse of what may have been had he acted in another way.

Besides talking about the book and the challenges he encountered while writing it, Harris also talked about his life as an actor, sharing some funny celebrity stories from his many years in show business. More touching, he also talked about his life as a father, and how critical his children are to his life, and how grateful he is that David is by his side every step of the way. It was really sweet. Finally, he answered some questions from the audience. (In case you have been wondering what NPH’s spirit animal is, it’s a dolphin. You’re welcome.)

Then it was time for the receiving line. As I waited for my turn to line up, strict instructions were issued: no photographs, no autographs, no extended conversations. People ahead of me were shaking hands with the author, but as my section of the auditorium joined the queue it became obvious that NPH’s hand must have been getting tired because suddenly, everyone was switched to a quick high-five. There wasn’t time to say much besides “Hi!” before the momentum of the people behind me swept me along to slap David’s hand and then out the door. But given there were nearly two thousand people in the room, what more could you expect?

It was a really fun talk; I’m sorry that I didn’t take notes so that I could go into greater depth about what NPH said. I got the impression that most of his little stories can also be found in the book, so as I’m sure I’ll have little “A-ha! I remember when he spoke about that!” moments as I read it.