Since 2008, Powell's Books of Portland, OR has run a book club/subscription service that sends a new, autographed hardcover book in a custom slipcase to its subscribers. This mailing is the 50th volume sent out by the club, which is pretty exciting. In addition to the usual author interview booklet, I thought that they might slip some extra anniversary goodies into the box. 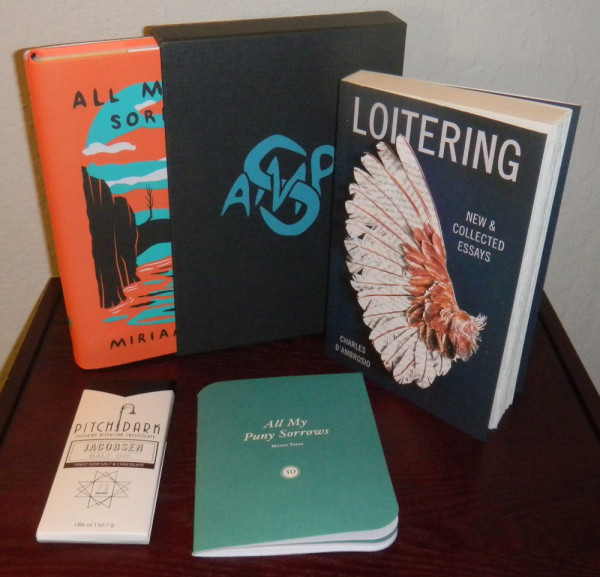 All My Puny Sorrows by Miriam Toews
Elf and Yoli are sisters. While on the surface Elfrieda's life is enviable (she's a world-renowned pianist, glamorous, wealthy, and happily married) and Yolandi's a mess (she's divorced and broke, with two teenagers growing up too quickly), they are fiercely close — raised in a Mennonite household and sharing the hardship of Elf's desire to end her life. After Elf's latest attempt, Yoli must quickly determine how to keep her family from falling apart, how to keep her own heart from breaking, and what it means to love someone who wants to die.

All My Puny Sorrows is the latest novel from Miriam Toews, one of Canada's most beloved authors — not only because her work is rich with deep human feeling and compassion but because her observations are knife-sharp and her books wickedly funny. And this is Toews at her finest: a story that is as much a comedy as it is a tragedy, a goodbye grin from the friend who taught you how to live.

I’m not familiar with Miriam Toews, even though she’s the author of several other novels. A quick skim of the plot synopsis reveals that this isn’t my usual sort of book, but I’ll give it a shot. It sounds like it could be frustratingly grim and sentimental. I hope Toews managed to work some humor into the story.


Loitering: New & Collected Essays by Charles D’Ambrosio
Charles D’Ambrosio’s essay collection Orphans spawned something of a cult following. In the decade since the tiny limited-edition volume sold out its print run, its devotees have pressed it upon their friends, students, and colleagues, only to find themselves begging for their copy’s safe return. For anyone familiar with D’Ambrosio’s writing, this enthusiasm should come as no surprise. His work is exacting and emotionally generous, often as funny as it is devastating. Loitering gathers those eleven original essays with new and previously uncollected work so that a broader audience might discover one of our great living essayists. No matter his subject — Native American whaling, a Pentecostal “hell house,” Mary Kay Letourneau, the work of J. D. Salinger, or, most often, his own family — D’Ambrosio approaches each piece with a singular voice and point of view; each essay, while unique and surprising, is unmistakably his own.

I haven’t seen any reviews of this book, or of Charles D’Ambrosio. Non-fiction essay collections can be hit or miss, and I never really go looking for them, so unless someone recommends a title to me I never see them. So this will be a step outside my usual reading patterns – that’s almost always a good thing.


Pitch Dark Chocolate Jacobsen Pinot Noir Salt Bar:
There’s nothing like nibbling on something while engrossed in a good book, and it’s hard to compete with chocolate as the ultimate reading snack. This artisanal bar is crafted in Portland, OR (hometown of Powell’s) and claims to provide the ultimate tasting experience for the connoisseur. We’ll see!

I rather expected a bit more in the box than just a candy bar – I mean, a previous box included a water bottle! – considering this is an anniversary of sorts. But two autographed books and a candy bar are still a lovely surprise in the mail, and there was a letter from the creators that talks a little bit about the history of the subscription book club. All in all, it was still pretty cool!

Peeking into the archives...today in:
2013: Beauty's Daughter by Carolyn Meyer
2012: Review: Wizardology (Ologies #3) by Merlin and Dugald Steer
2011: Rambling about audiobooks
2010: News: When Technology Brings Too Much Information to the Masses
2009: Going on hiatus...
2008: Contest: Patrick Rothfuss and Heifer International
Collapse