My husband subscribes to a great graphic novel subscription box called Comic Bento, which sends out a box of comic books at the end of every month. This can make the timing a bit weird, like receiving the August box in mid-September, but the service promises a minimum $50 value in comics each month, which isn't bad considering subscriptions start at $20.00 (plus shipping).

This month, the box's theme was Science Fiction. Comic Bento Project Manager Costello muses in an enclosed letter:
Where do we go from here? For centuries, the most imaginative minds in science fiction have written about a time when our communication devices would have viewscreens...When we had instant access to all the answers. When we “drove” self-driving cars...of course, science fiction doesn't have to predict the future to be fun. It can be about gung ho planet hoppers, with space battles where you can hear every laser and explosion, and no matter where you go you find oxygen and English.

So what graphic novels were selected for inclusion in Comic Bento's Sci-Fi collection?

Edgar Rice Burroughs' John Carter: The Gods of Mars adapted by Sam Humphries and Ramon Perez (Marvel Comics): The classic Edgar Rice Burroughs tale comes to graphic life! After ten long years, John Carter finally returns to Barsoom - but finds himself in the Land of the Dead! He's faced Martian beasts, but can he handle Martian gods? And is the goddess Issus is finally revealed, will Carter be able to reach his long-lost love Dejah Thoris ... before she is sacrificed? Plus, who is Cathoris, the Red Martian who mysteriously looks like Carter? Join rising sensations Sam Humphries and Ramon Perez on an incredible journey though the unforgettable worlds of Mars! $14.99.
The Surrogates by Robert Venditti & Brett Weldele (Top Shelf Productions): The year is 2054, and life has been reduced to a data feed. The fusing of virtual reality and cybernetics has ushered in the era of the surrogate, a new technology that lets users interact with the world without ever leaving their homes. It's a perfect world, and it's up to Detectives Harvey Greer and Pete Ford of the Metro Police Department to keep it that way. But to do so they'll need to stop a techno-terrorist bent on returning society to a time when people lived their lives instead of merely experiencing them.  $19.95.

Ferro City by Jason Armstrong (Image Comics): Private Investigator Cyrus Smithe's life has just taken a turn for the worse - his partner, Harry Weston, is dead. The cops are out to pin it on him, and the only solid proof he has to clear himself is a tiny gadget that could grant ten million sentient robots their freedom: the Medusa Key. Robot detectives, gorilla thugs, French gangsters and Russian mobsters heat things up as Cy Smithe and Kate Weston track her father's killer through a sea of double and triple crosses to find the elusive piece of technology that's the key to the mystery. $15.99.
Virga: Sun of Suns by Karl Schroeder, Jeff Moss, and Guy Allen (Blind Ferret Entertainment): Devoid of gravity, Virga is a massive balloon, three thousand miles in diameter. The humans that exist in this world must build their own fusion suns for warmth and their own spinning "towns" for gravity. Years ago, the nation of Slipstream came from the clouds and conquered their neighbor, Aerie, destroying their sun and killing the parents of Hayden Griffin. Hayden is bent on revenge, but in Virga, up is often down and Hayden's plan may not go off as he'd hoped. On the brink of war, Hayden's 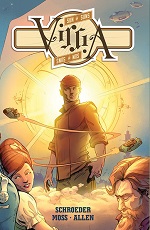 checkered past might just come in handy. One part Steampunk Adventure, one part Sci-Fi Epic and one part Action Spectacular, Virga: Sun of Suns is truly like nothing you've seen before. $14.99.
Science fiction has never been one of my strong genres, but it's one of my husband's favorites so he is thrilled with the selection of this box. There's a good variety of publishers here – one of the “Big Two”, a couple of the mid-sized comic publishers and a book from Blind Ferret, the parent company of Comic Bento.  I think I am most intrigued by the John Carter graphic novel - I've always been curious about Burroughs' sci-fi series, but I've never checked it out.


If you're interested in learning more about Comic Bento, visit their website. Boxes ship monthly, and subscriptions start at $20 per month, with discounts should you buy a three- or six-month subscription.