BOOK RIOT SUBSCRIPTION BOX
JANUARY 2015
"The weather has turned colder, the days have turned shorter, and the internet has begun to explode with Best Books of 2014 titles.  'Tis the season for bookish reflection, and we at Riot HQ are no exception.  We've spent a lot of time thinking about the experiences that defined our year in reading, and the theme that really stands out is how much fun we had seeing wiriters and artists put new spins on familiar stories." 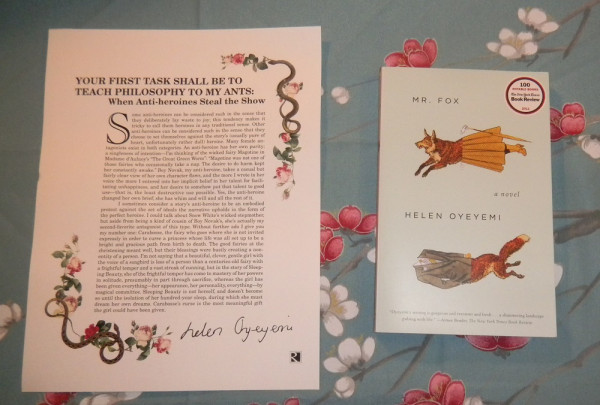 MR. FOX BY HELEN OYEYEMI
Fairytale romances end with a wedding. The fairytales that don’t get more complicated. In this book, celebrated writer Mr. Fox can’t stop himself from killing off the heroines of his novels, and neither can his wife, Daphne. It’s not until Mary, his muse, comes to life and transforms him from author into subject that his story begins to unfold differently. Meanwhile, Daphne becomes convinced that her husband is having an affair, and finds her way into Mary and Mr. Fox’s game. And so Mr. Fox is offered a choice: Will it be a life with the girl of his dreams, or a life with an all-too-real woman who delights him more than he cares to admit?

I really enjoyed Helen Oyeyemi's Boy, Snow, Bird and I've been meaning to go back and pick up a copy of Mr. Fox to read.  This is perfect!  Accompanying the book is a print of an essay Oyeyemi about anti-heroines.  It's the unique touch exclusive to Book Riot subscribers.
$16.00 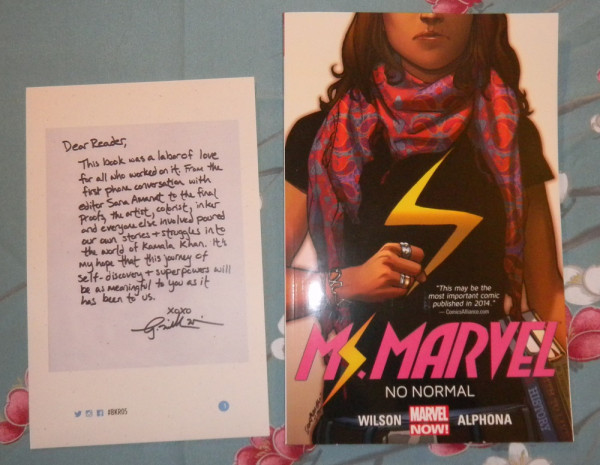 MS. MARVEL VOL. 1: NO NORMAL BY G. WILLOW WILSON AND ADRIAN ALPHONA
Marvel Comics presents the all-new Ms. Marvel, the groundbreaking heroine that has become an international sensation! Kamala Khan is an ordinary girl from Jersey City - until she is suddenly empowered with extraordinary gifts. But who truly is the all-new Ms. Marvel? Teenager? Muslim? Inhuman? Find out as she takes the Marvel Universe by storm! As Kamala discovers the dangers of her newfound powers, she unlocks a secret behind them as well. Is Kamala ready to wield these immense new gifts? Or will the weight of the legacy before her be too much to handle? Kamala has no idea either. But she's comin' for you, New York! It's history in the making from acclaimed writer G. Willow Wilson (Air, Cairo) and beloved artist Adrian Alphona (Runaways)!

Sweet!  Another title that I was previous aware of and interested in reading.  Ever since I first heard rumors about the new Muslim superhero, I've wanted to read Ms. Marvel.  So far, this is a fantastic box!

A copy of a note written by G. Willow Wilson to Book Riot subscribers is also included in the box.
$15.99 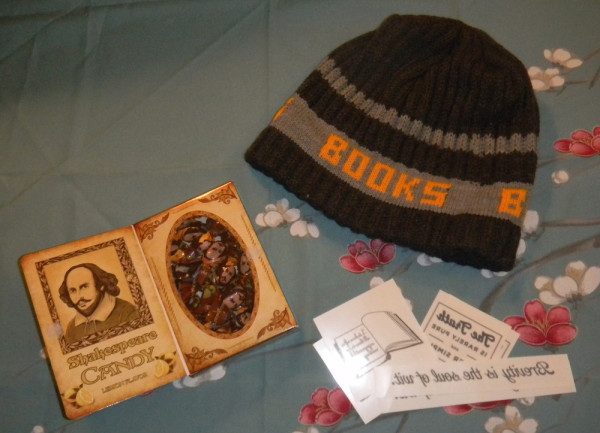 BOOKS BEANIE HAT
Oh man, I love this hat, and normally I don't even wear beanies.  The colors are great, and you know I love wearing my book-love loud and proud.  (Heck,since it says "books" all over I can even claim this beanie is work appropriate.)  It's warm and fits nice 'n' snug.  I just wish I knew who made the hat so I could order a back up hat or two.
$?.?? - no idea, I never buy beanies

SHAKESPEARE CANDY
This is a box of hard lemon candies, indiviual lozenges wrapped in plastic printed with the Bard's face.  The cardboard box is designed to look like a book.  It's a cute gift idea.  I'll probably end up giving this away to someone, though - I like candy, but not enough to eat a whole box of these.
$5.95

LITOGRAPHS TEMPORARY LITERARY TATTOOS
These six temporary tattoos are all book themed.  There are two each of three designs:
- "Brevity is the soul of wit."
- "The Truth is rarely pure and never simple."
- "I declare after all there is no enjoyment like reading."
I like temporary tattoos, but I didn't find these designs very appealing.  I might use the "Brevity is the soul of wit" ones because I like the script font used, but not the others.
$15.00 ($5 per pair)

What an unusual box.  I loved the two books and the beanie, but the candy and tattoos were basically throwaway items to me.  Still, that's the nature of subscription boxes - at least I liked the more expensive items!

Quarterly Co. is a subscription box service company that partners with celebrities to "curate" boxes, usually themed around food or fashion or cool gadgets, which are mailed out four times a year. For their book-themed box, Quarterly partnered with Book Riot. At $50.00 per quarter, the box isn't the cheapest subscription box service out there, but the curators promise that the retail value of the items you receive will be more than the cost.