Powell's Indiespensable Book Club
Volume 54: Best Boy
Since 2008, Powell's Books of Portland, OR has run a book club/subscription service that sends a new, autographed hardcover book in a custom slipcase to its subscribers. Each mailing is accompanied with notes on the selected book and a surprise selection of extra items. 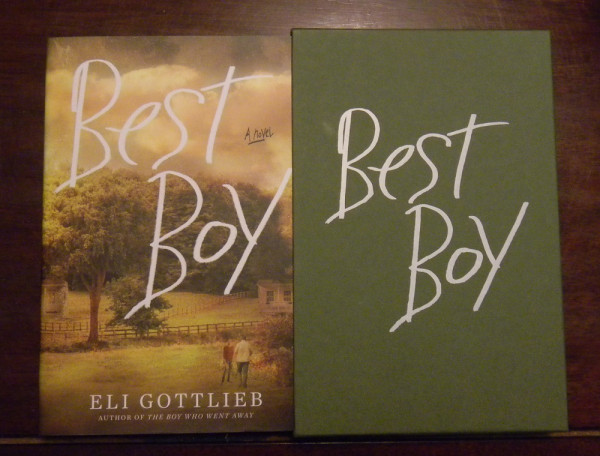 BEST BOY by Eli Gottlieb
For fans of The Curious Incident of the Dog in the Night-Time comes this landmark novel about autism, memory, and, ultimately, redemption.
Sent to a "therapeutic community" for autism at the age of eleven, Todd Aaron, now in his fifties, is the "Old Fox" of Payton LivingCenter. A joyous man who rereads the encyclopedia compulsively, he is unnerved by the sudden arrivals of a menacing new staffer and a disruptive, brain-injured roommate. His equilibrium is further worsened by Martine, a one-eyed new resident who has romantic intentions and convinces him to go off his meds to feel "normal" again. Undone by these pressures, Todd attempts an escape to return "home" to his younger brother and to a childhood that now inhabits only his dreams. Written astonishingly in the first-person voice of an autistic, adult man, Best Boy — with its unforgettable portraits of Todd's beloved mother, whose sweet voice still sings from the grave, and a staffer named Raykene, who says that Todd "reflects the beauty of His creation" — is a piercing, achingly funny, finally shattering novel no reader can ever forget.

Admitting this makes me sound like an ass, I admit, but lately I've been a bit “over” books with autistic child narrators. The Curious Incident of the Dog in the Night-Time did not enchant me as it did so many other readers, and other novels with the same device, while well-written, were not to my tastes. Having said this, I am intrigued by Best Boy. I can't recall a book I've read with an adult who lives with autism. It could be more interesting. I may read this novel, or I might pass it on to my friend Jeans since she works with children on the autism spectrum and definitely enjoys books like this. As always, each Powell's title comes autographed and includes a little pamphlet containing an interview with the author, Eli Gottlieb. 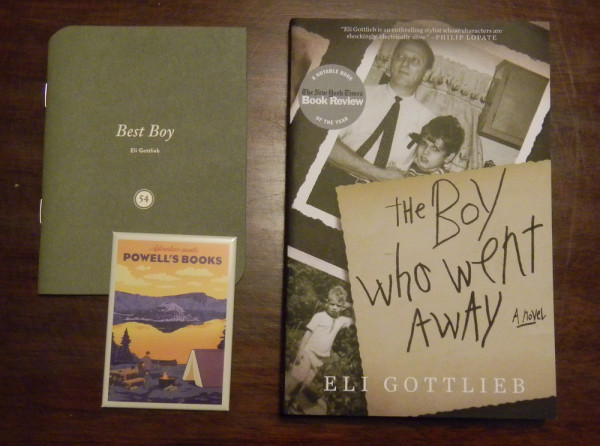 THE BOY WHO WENT AWAY by Eli Gottlieb
Denny Graubart, child-narrator and "domestic surveillance expert," is having some terrible suspicions about his mother and autistic brother. It's the 1960s, aka the Diagnostic Dark Ages of Autism, and while his mother struggles to keep his brother out of an institution, signs of something more disturbing are beginning to emerge before young Denny's eyes. Battered by his own tragicomic sexual awakening during a long, hot summer, Denny will eventually find his most horrified suspicions about his family confirmed. A powerfully drawn portrait of two brothers locked into an asymmetrical childhood and a family struggling against a weight of medical ignorance, is "shockingly, electrically alive" (Phillip Lopate).

It's clear why Powell's paired these two books. Best Boy follows the story of a middle-aged man on the autism spectrum while The Boy Who Went Away, a novel written twenty years earlier, focuses on a boy's childhood with a brother who is on the spectrum. While I just said I was tired of books starring kids with autism, this book is different because I'm really curious about how autism was diagnosed and treated in the 1960s, when it was something families hushed up and hid rather than work through in the open. This paperback was signed by the author.

POWELL'S BOOKS Magnet
I LOVE THIS MAGNET.
I'm a sucker for art that's created in that classic WPA National Park Service style, and this image of Crater Lake is lovely. I would have liked the magnet just for that. But throw in a bookish twist to the camping scene and it's my favorite Powell's logo item that I've received in one of these Indiespensable boxes.

Not my favorite book selection this month, but even if I decide not to read them I already know someone who will enjoy the stories so I consider it a winning selection.