Since 2008, Powell's Books of Portland, OR has run a book club/subscription service that sends a new, autographed hardcover book in a custom slipcase to its subscribers. Each mailing is accompanied with notes on the selected book and a surprise selection of extra items.

Volume 56's shipment was delayed due to changes in Powell's web platform. As an apology to subscribers, the box was free! That was a very special and greatly appreciated surprise. 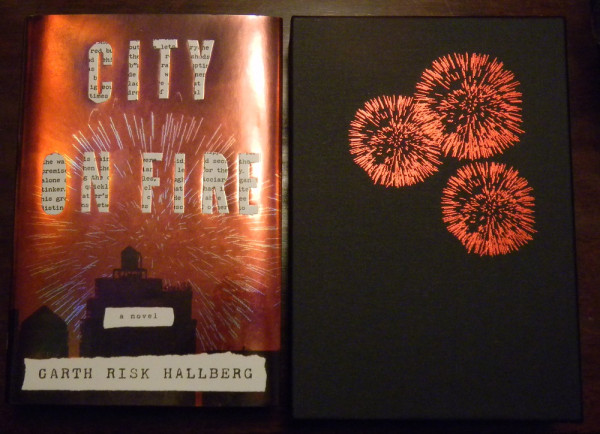 CITY ON FIRE by Garth Risk Hallberg
New York City, 1976. Meet Regan and William Hamilton-Sweeney, estranged heirs to one of the city’s great fortunes; Keith and Mercer, the men who, for better or worse, love them; Charlie and Samantha, two suburban teenagers seduced by downtown’s punk scene; an obsessive magazine reporter and his idealistic neighbor—and the detective trying to figure out what any of them have to do with a shooting in Central Park on New Year’s Eve.
The mystery, as it reverberates through families, friendships, and the corridors of power, will open up even the loneliest-seeming corners of the crowded city. And when the blackout of July 13, 1977, plunges this world into darkness, each of these lives will be changed forever.
City on Fire is an unforgettable novel about love and betrayal and forgiveness, about art and truth and rock ’n’ roll: about what people need from each other in order to live . . . and about what makes the living worth doing in the first place.
One of the owners of the store I work at read this and LOVED it.  Other than that, I don't know much about the book, but it has a cool cover.  I love the shiny metallic red fireworks printed against the black background of the slipcover.  The book is autographed by the author on the title page.

As always, the book is accompanied by a little chap book containing a brief bio of Garth Risk Hallberg (a good-looking guy if his photo is to be believed) and an interview with him.  This unique touch is one of the things I simply LOVE about the Indiespensable subscription. 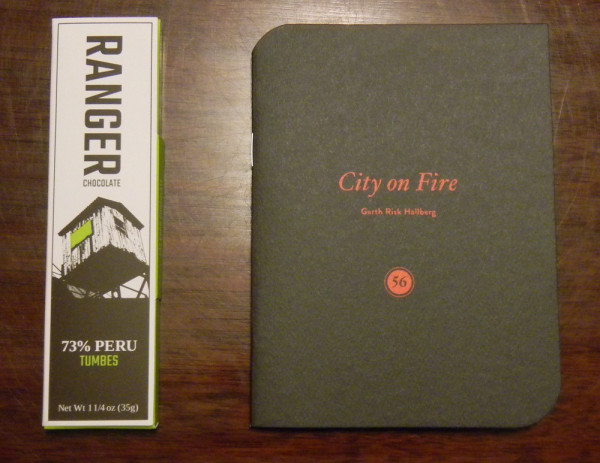 RANGER CHOCOLATE 73% Peru tumbes Chocolate Bar
This is a medium-sized chocolate bar, according to Powells.  Ranger Chocolate makes artisanal chocolates and caramels in Portland, OR, where Powells is headquartered.  They claim that their Peruvian cacao beans are organic and sourced directly from the farmers.  The chocolate is bitter but has a slight wine-y/fruity note.  It's nice enough but I wouldn't buy it again.

Unlike previous boxes, there's only the one book and one extra item - but hey, the box was free so I'm happy with anything I got.  CITY ON FIRE is a book I've been curious about, and since it's here in my hands I might actually read it in a timely manner.